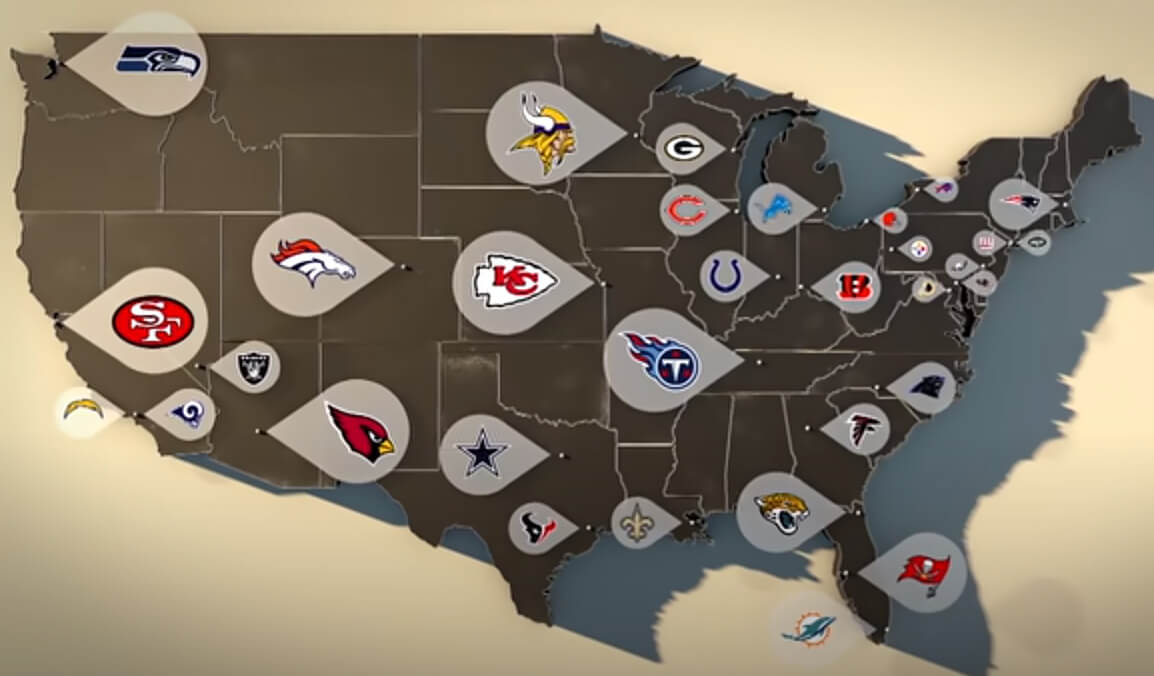 The current National Football League has been around since 1920. It first started as the American Professional Football Association. The APFA became the NFL in 1922 and today, is America’s most popular sports league.

Watch the history of the entire league on YouTube >

1920: The Arizona Cardinals were the Chicago Cardinals from 1920 until 1959, then they moved to and played in St. Louis until 1987. The team moved to Phoenix from there and was known as the Phoenix Cardinals, until 1993 when it took its present name.

1920: The Chicago Bears formed in 1922 from the The Decatur Staleys (1920) and then Chicago Staleys (1921). Along with the Cardinals, they are NFL’s first teams and oldest franchises.

1925: The New York Giants were one of five teams admitted to the NFL in 1925. The other four (the Pottsville Maroons, the Detroit Panthers, the Canton Bulldogs, and the Providence Steam Roller) didn’t survive.

1930: The Portsmouth Spartans were sold and moved from Ohio to Detroit on June 30, 1934, after four years in the NFL. They’re now the Detroit Lions.

1932: The Boston Braves relocated to the District of Columbia on July 9, 1932, and became the Washington Redskins a year later.

1933: The Philadelphia Eagles, the Pittsburgh Pirates, and the Cincinnati Reds came into the league in 1933. That particular Cincinnati team didn’t survive, folding a year later. The Pirates would become the Pittsburgh Steelers. The Eagles and Steelers would briefly become the Steagles in 1943 when they merged for one year after losing so many players to the military during World War II.

1953: The Indianapolis Colts entered the league in 1953 as the Baltimore Colts, then moved to Indianapolis in 1984.

1960: The Dallas Cowboys entered the NFL.

1961: The Minnesota Vikings entered the NFL.

1966: The Atlanta Falcons entered the NFL.

1970: This was an eventful year. The American Football Conference was formed on May 17, 1969, prompting the entry of several teams when the American Football League merged with the NFL: the New England Patriots (previously the Boston Patriots), the Buffalo Bills, the Cincinnati Bengals, the Denver Broncos, the Houston Oilers, the Kansas City Chiefs, the Miami Dolphins, the New York Jets, the Oakland Raiders, and the San Diego Chargers. The San Diego team moved in 2017, becoming the Los Angeles Chargers. The Houston Oilers relocated to Tennessee in 1998 and played for two years as the Tennessee Oilers before becoming the Tennessee Titans in 1999. The Oakland Raiders moved to Los Angeles and then back to Oakland and finally to Las Vegas Raiders in 2020. Also in 1970, the Super Bowl trophy was renamed the Vince Lombardi Trophy on September 10, a week after Lombardi’s death from cancer at age 57.

1976: The Seattle Seahawks and the Tampa Bay Buccaneers entered the NFL.

1995: The Carolina Panthers and the Jacksonville Jaguars became NFL teams.

2002: The Houston Texans entered the NFL, making it the newest NFL team.